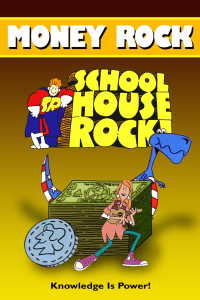 Decades ago, Schoolhouse Rock famously taught millions of kids how a bill became a law and how parts of speech work. I’m Just a Bill and Conjunction Junction are in the Pop Culture Hall of Fame (if there was one). Don’t forget Three is a Magic Number because it rounds out the three most popular Schoolhouse Rock videos.

However, did you know that Schoolhouse Rock also taught kids about money? It was released in 1994, over two decades after the Multiplication Rock that started it all. It’s not very well-known. When ABC does it’s Schoolhouse Rock! 50th Anniversary Singalong on February 1st, there, sadly, will be no money songs.

I found the DVD of Schoolhouse Rock Money Rock in my library. If you are a Disney+ subscriber, it’s easier to stream it for free. Another option is to watch it on YouTube. The quality of the videos is poor, but better than nothing:

Each of the Money Rock shorts is three minutes long. In about the time that you’d watch a half-hour sitcom, you have a personal finance education. Well, it’s more complicated. The videos go quickly to fit it all in three minutes. The explanation of Dollar Cost Averaging in the investing video is good, but the concept can’t be addressed in only fifteen seconds.

The best thing to do is watch these with the kids and talk about them afterward. My kids had questions about each one. It’s a good hour spent and makes for an easy transition into other Schoolhouse Rock seasons.

Here’s a summary of each episode:

Becky Sue realizes that her ukelele isn’t going to work if she wants to be a country western star. She needs a guitar, amps, speakers, microphones, etc.

The banker is there to help. He explains that if Becky deposits her money, the bank will pay her interest, and she’ll have enough for the equipment in a year.

Becky doesn’t want to wait a year, so the banker explains that she can take a loan and get the equipment immediately. The catch is that she now has to pay the interest.

Dollars and Sense is one of my favorite lessons. Kids learn that interest can either work for you or against you.

My 9-year-old didn’t understand why someone would have to pay the bank interest on the loan. I tried to explain that the bank has to make money. Giving money and just hoping to get paid back in the future isn’t helpful to the bank.

Tax Man Max explains taxes. It went quickly, and I had to pause and reply a few times to catch the different types it portrayed: Income, property, sales, utilities, and licenses for dogs and cats.

This does an excellent job of explaining that taxes fund the city, state, and federal governments so that we have schools, roads, train tracks, libraries, police, firefighters, and mail carriers.

There was a quick explanation that people get upset about paying taxes, so they rightfully want to know that the money is being used well.

Finally, there’s a quick explanation of how tax deductions work. While accurate, a one-liner on tax deductions does not provide much education for kids.

Where the Money Goes

This did an outstanding job of telling kids that they can help by saving money on the phone bill, electricity, and even the laundry by not making a mess.

One part I didn’t like is that it mentioned, “If you plan to inherit a million dollars, then there’s no reason to save.” Even in 1994, that may not have been retirement money. You never know what can go wrong with inheritance plans.

How does a kid budget his allowance of $7.50 a week? At the beginning of the week, he feels rich.

He budgets an ice cream sandwich after school lunch at $0.50 a day or $2.50 per week. However, he spends the rest of money his money too quickly. He missed opportunities to compare prices and save money.

The kid decides he can do other jobs to make some more money from his parents.

Why do kids need to learn about the National Debt? I’m not sure.

My kids had questions, and I explained that we borrowed money and should pay it back. However, I didn’t want them to be concerned that the United States owes 31 trillion dollars. Japan’s GDP to Debt is twice the United States. I also didn’t want them to think it was okay to borrow money and not pay it back. It’s probably best to avoid this topic with kids.

Despite the success of I’m Just a Bill, there are many adults who don’t know how a bill becomes a law. Nonetheless, it’s videos like this (and I’m Just a Bill) are useful tools to send to adults. As a bonus, Bill from I’m Just a Bill appears at the end.

This episode is about the history of how bartering worked with cavemen.

It’s hard to trade yaks for cows because they are big and bulky. Shiny shells are easier.

A pigeon teaches kids to buy low and sell high. Using your money to make more money is called an investment. Kids learn about what a stock is. There’s a very quick explanation of Dollar Cost Averaging.

One fun part of this video is that the pigeon gets stock quotes in fractions from a newspaper. Nowadays, stock prices are in decimals, and I don’t think papers publish the prices.

The Check’s in the Mail

Overall, this episode wasn’t very useful. We don’t use checks too much nowadays. We use electric transfers, debit cards, or credit cards.

There’s a little interesting part about how your bank transfer money through a central bank to the receiver’s bank.

To write this article, I sat down with my kids to watch it for the second time. I put it on for them around two years ago. My 10-year-old remembered it well, but my 9-year-old did not. I think it’s helpful for this age group because they asked questions, and we could discuss. The discussions were quick, though – they wanted to move on to the next one.

I don’t know if that’s a sign they were looking forward to the next one or if they just wanted to plow through them and get to another activity they enjoy more.

If Schoolhouse Rock moves a little too fast or if you are looking for another television show to learn about money, see teach your kids about money with television.